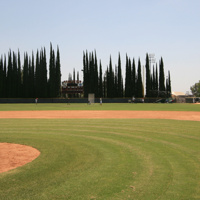 During his 25-year tenure as head baseball coach and as the founding athletic director of the Claremont-Mudd-Scripps athletic department, Bill Arce developed the program, facilities and staff into one of the top NCAA Division III private college programs in the country and the department remains so today. Coach Arce has been nominated for the Presidential Medal of Freedom for his role as "Baseball's First Global Ambassador." The field, named in his honor, houses the Stags' baseball team.