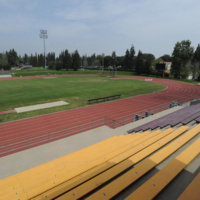 John Zinda was recruited as football coach in 1962. In 1979 he led the Stags to the Southern California Intercollegiate Athletic Conference championship. He considered himself an educator and a shaper of character, using football to make better men. "You can learn by winning, and you can learn by losing," noted Zinda at the close of his thirty-year coaching career. After he succumbed to cancer in 1995, Coach Zinda was warmly eulogized in the Los Angeles Times as the paradigm of the athletic coach as moral educator.

The Fritz B. Burns Stadium allows spectators to watch the Claremont-Mudd-Scripps football team, women's lacrosse, and the men's and women's track and field teams. Alumni and students alike fill the stands to cheer on both Stags and Athenas.

This event content is powered by the Localist Community Event Platform.