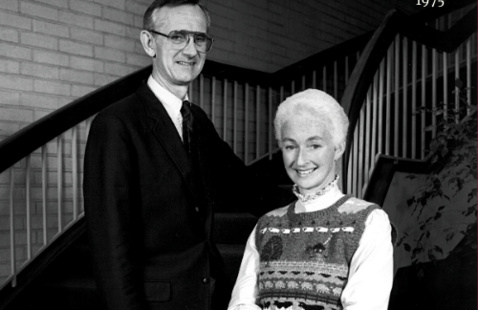 Appointed president of CMC in 1970, Jack Stark ’57 GP’11 served as CMC's chief executive during some of the most challenging periods in the history of higher education. Under his leadership, CMC's endowment grew from $10 million to more than $350 million. He led the college to exceptional growth in reputation, academic quality, and student selectivity. Under Stark's leadership, CMC expanded its influence in public affairs through the creation of nine public policy research institutes. In 1976, CMC marked its 30th anniversary by becoming coeducational. In 1981, CMC's name was changed to Claremont McKenna College, honoring founding trustee Donald C. McKenna. Throughout those exciting years, Jil Stark ’58 GP’11, was an important presence on the CMC campus and solidified her role as a beloved first-lady of Claremont McKenna College and as Athenaeum director. Join the community and hear from Jack and Jil as they reflect on their 29-year presidency.