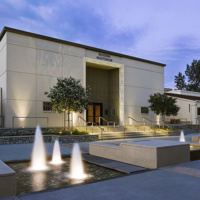 Construction of McKenna Auditorium was completed in October 1953 and was named in honor of A.G. McKenna, father to Donald McKenna, who was instrumental to the College's founding and one of the College's first trustees. Important events such as Convocation and student orientation seminars are held in the auditorium.

This event content is powered by the Localist Community Event Platform.